☼ April 17, 2017.
I would like to return almost after a year to ►the article about Fujifilm X-Pro1 (not translated yet, use some translator please). Among other things, I mention there:

"– Artifacts in image: not in the atelier, but in nature, when photographing at greater distances, eg. in grass, leaves, etc., sometimes they merge into a wholes, that looks like a painting or a result of strong internal noise reduction. My friend Jan and I underwent a ruthless analytical analysis according to the methodology of the Just brothers, while we found that the blame in Adobe Lightroom, respectively, its too large sharpening radius (1). Therefore, if these phenomena occur, it is necessary to refine the sharpening, respectively, slightly change its settings. Clarity increasing helps too. What is important, however, is that these artifacts do not arise from a noise reduction program in the camera, that interferes RAWs (RAFs). It probably will be there, but fortunately works without consequences."

With this conclusion, I ended the article and did not address the problem more, because the camera went to the new owner. Later, I started missed the beautiful Fujifilm gear again, so I bought the X-T10 with a variable focal lenght Fujinon XF 18-55 mm f/2.8-4.0 R LM OIS lens. The camera has improved control over the X-Pro1 and has eliminated many clumsy. But the main problem, the artifacts mentioned above, remained. Photographs has been developed in Adobe Lightroom 6.1 and 6.10, Capture One Pro 10 and Photo Ninja 64 1.3.5c. In all cases the result was the same. The artifacts could not be removed, only relieved by very intense deconvolution sharpening (you are practically accentuating noise and "restoring" the lost structure). The only program I haven't tried, because it only exists for Macintosh, is Iridient Developer. But even he would probably not cope with these ugly formations. Their nature is probably much deeper in the heart of the camera – the X-Trans sensor.

Compared to a sensor with Bayer mask, X-Trans uses a significantly larger number of pixels to calculate one image (3x3 versus 2x2). According to Fuji, this structure, more or less irregular, was supposed to prevent the formation of moiré without having to use an AA filter. Instead, it brought the need for much larger interpolation (the resulting point is not calculated from four, but from nine points). This leads to a significantly greater averaging of the values of the original information, brought by the flyed in photon. As a result, they are some sort of molten units, that resemble a painting, or the result of a strong noise reduction before creating a RAW file. Apparently it is also involved in the creation of artifacts to a lesser extent; nowadays, almost all cameras are reducing noise internally.

However, Fujifilm cameras with X-Trans sensors cannot be recommended to anyone, who is planning to exhibit his photographs in larger formats, or simply do not like, the granite bollard look like a plastic one. It is a pity, because working with these devices is otherwise extremely pleasant and just looking at them will delight. Sadly, Fujifilm, an otherwise trustworthy and traditional Japanese company, did not thoroughly test, reject, and used conventional APS-C sensors (or invent something else) in its cameras, after receiving these sensors from Sony.

Therefore, I must also correct my claim that the photographs from X-Pro1 (and virtually all Fujifilm cameras with X-Trans sensor) can compare not only with Nikon D3X, but also Canon 5DSR. In terms of contrast, detailcontrast and color, yes. Not in the quality of detail drawing. 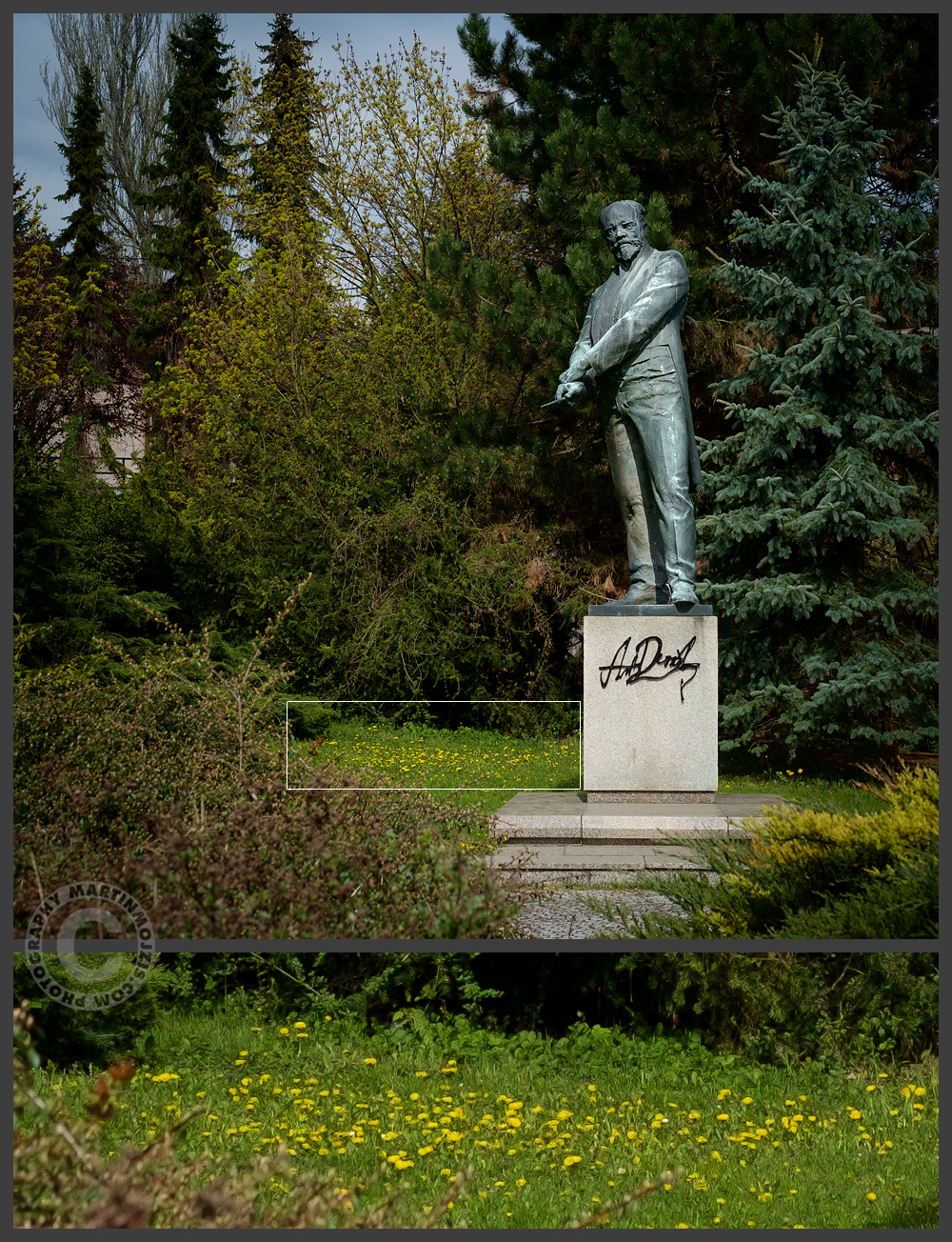 Let's take a look at specific demonstrations and follow them to the town Nelahozeves, near the Vltava River. Antonín Dvořák was born here and later admired passing trains near the nearby railway tunnels. His statue is now in a park, which is very well maintained and in spring trees and shrubs bloom beautifully. I would like to point out in advance, that the published images are only trial ones, I don't usually use such saturated colors at all, also the composition is not always ideal. But I wanted to find out what new technology can do. Photographed to RAW, developed in Adobe Lightroom 6.10, noise reduction disabled.

See for yourself, the Fujifilm X-Pro1 with the Fujinon XF 35mm f2R WR lens (sharp and high-quality) portrays the image very engaging, at least with the eye of the average viewer. Colors, sharpness, contrast, detailcontrast ... everything seems to be excellent. It is only when we look closely (or at a large enlargement), that there is something strange about flowering dandelions. They are already fully in the field of sharpness, but not only their bright heads, but above all the leaves blend into a kind of abstract matter. Don't you find it so obvious? Not seeing anything? Does not matter. Let's move on. 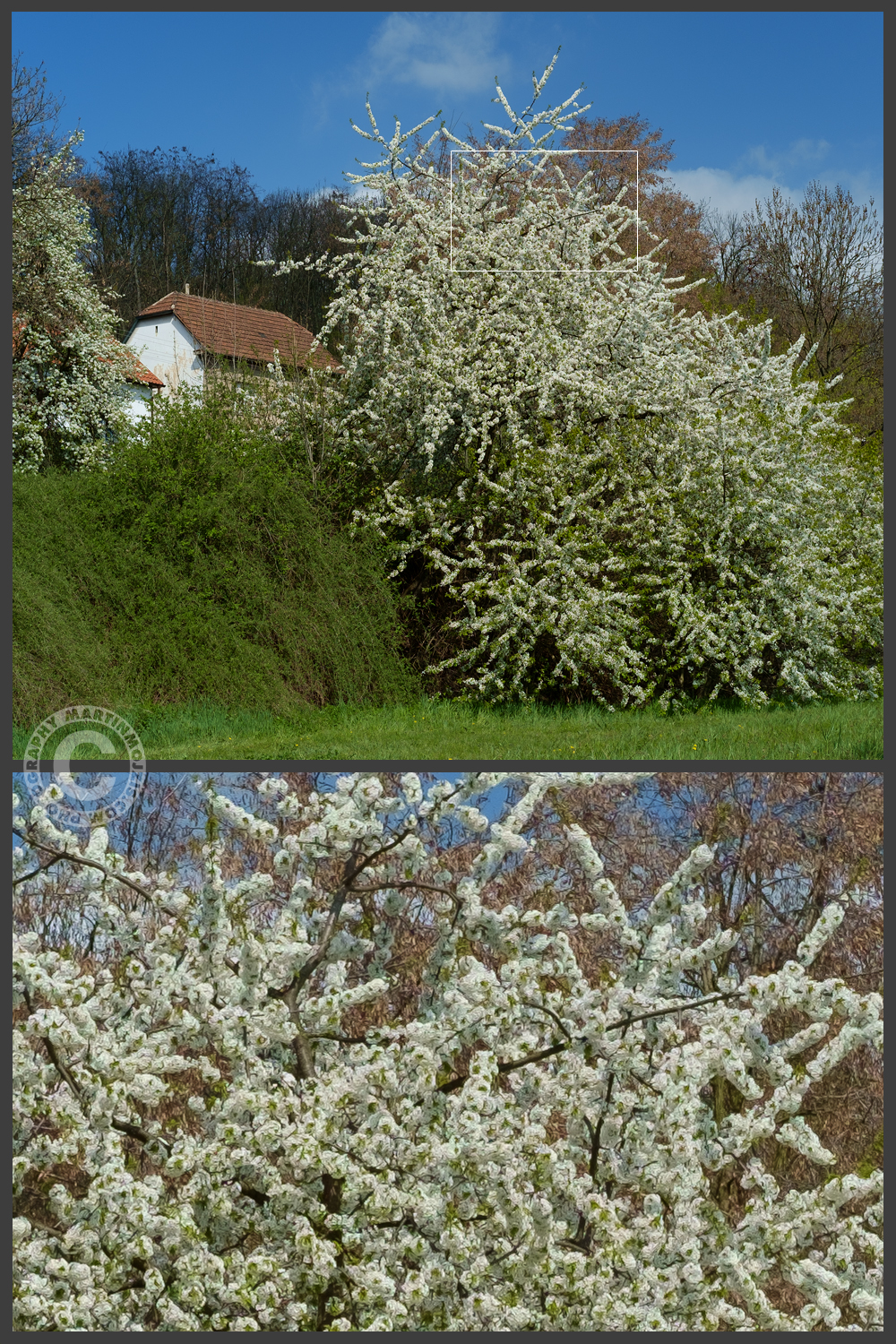 In the railway station are beautiful flowering shrubs, perhaps sloes. Again, the upper image appears to be perfectly fine. But look at the crop at 100% magnification below. Flowers look like artificial. They are merged, as if the spring sunshine melted them ... and the brown leaves of the bush in the background? Talk for nothing! And it will get worse ... 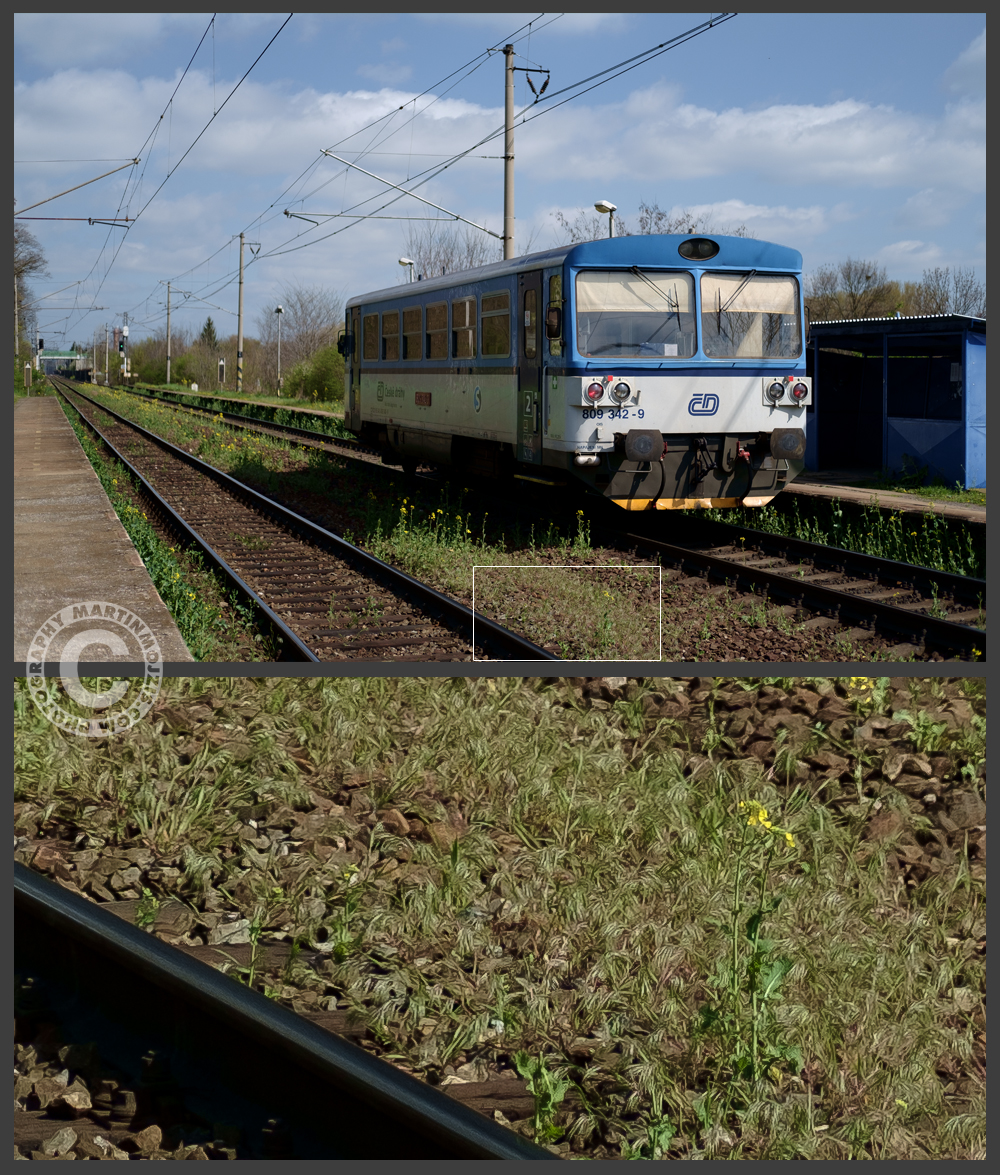 We have a love for trains with Antonín Dvořák in common. And such a little engine train, it is always a strong inspiration for photography. Here, although it would be better to wait for light to strike the left sidewall, the right edge of the headlamps is too close to the stop post, but for our purpose this image is sufficient. Look at the crop below. Can you guess, what it is around the blooming rapeseed? Apparently some plants ... but which one? The botanist would despair, if I brought such a picture to his atlas. Or was there something spilled between the sleepers? Poured?

No, they really are plants. And the X-Trans sensor, its massive interpolation, or recalculation, devising missing points. Didn't anyone in Fujifilm really notice that yet? And by the way, should photography, in principle, not be the most accurate picture of reality? –

So it seems that the only right way is to leave X-Trans sensors (ideally Bayer mosaic too, but that will be worse). The first such camera is the Fujifilm GFX 50S. Here we will find a 50 Mpx Sony sensor with a conventional Bayer mask, measuring 43.8 x 32.9 mm, aspect ratio 4 : 3, without AA filter. After testing the first RAW I can say, that the photographs seem to be very good. I have never discovered artifacts anywhere, colors, contrast and detailcontrast are traditionally excellent. The new GF lenses seem extremely sharp, and given that they are (supposedly) designed for up to 100 Mpx, with a 50 megapixel sensor Nyquist frequency don't bother and cheerfully produce moiré, wherever they can. Which is understandable and perhaps Lightroom with local modifications with these brightly colored patterns usually easily cope. It just seems to me, that not very obvious surface structures are still too smooth, compared to perhaps 5DSR or A7RII. The price is higher so far, but its decline will probably not last long, due to the smaller number of interested buyers.

►Fujifilm X-Trans: No more unwanted artifacts.
►To the beginning of the article.
►Overview of all articles.
►Homepage.
►Site map.